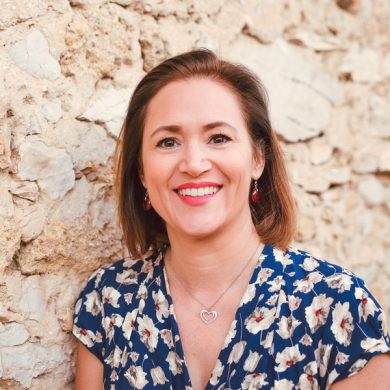 Coming from Southern California, I’ve now been living in France full-time since 2000. I like to say I’m living the California dream in the South of France. How did I end up here, when it started as the dream of a 13-year-old girl? There were a couple of twists and turns along the road.

The first major step after French classes was a university exchange year in Aix-en-Provence. This is where I felt the full effects of culture shock and lack of language fluency. Talk about a learning experience! I discovered a lot about myself, my roots, and what it takes to live abroad. By the end of the year, I had assimilated to my new life and couldn’t bear leaving. So, my goal was to come back and live in France, whatever it took. I finished my degrees in Business and French and then did a Masters in International Affairs.

After school, I took what I thought was an entirely domestic job in a telecoms firm to pay off my student loans. Two years later, they ended up offering me a position in Paris! Ten years flew by, and I had a French husband, a flat in Paris next to the Bois, and two little Franco-Americans. If I had not been from California, we might have stayed forever…but I required more UVs. In 2010, our family moved to sunny Montpellier in the Languedoc area of France.

My 15 years with the global telecom were instructive and fulfilling. While I was researching a way to move my parents over, however, I discovered the plight of English-speaking retirees in France. We created Renestance in 2015 to help retirees and others dreaming of a French lifestyle. To help clients navigate the French real estate market, I got a Bachelors in Immobilier in 2016. Renestance is now a brokerage, and we are licensed house-hunters (Chasseur Immobilier) or buying agents.

If you dream of living in France, our bilingual team makes it easier for you. Learn from our experience and enjoy the exceptional quality of life, without all the hassle.